The winners of national Cycling Luminaries Awards were announced tonight at a Gala Bicycle Summit Awards Dinner at the Gabba in Brisbane.

The impact of women nominees from across Australia was clearly evident with a Special Judges Award for Women’s Development being made to Jordana Blackman for the vibrant and welcoming network—Chicks Who Ride Bikes.

The ACT’s Physical Activity Foundation won the Bike Culture and Behaviour Change Award for its Ride or Walk to School program. A long-term intervention to build healthy travel behaviours in primary aged children, it has grown to encompass 63 schools since 2013 and is targeting 84.

Bicycle Queensland’s Ben Wilson was recognised with the Leadership Award for his work advocating with governments for better bikeways across the state for over 25 years, increasing mass participation opportunities for all.

Presided over by the Queensland Minister for Main Roads and Road Safety, the Hon Mark Bailey, the Awards were part of the Australian Bicycle Summit and welcomed international and local VIPs, national and local industry executives and bicycle organisations. 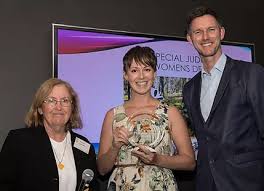 “Tonight’s ceremony was a wonderful opportunity to understand the commitment, diversity and passion of the bicycle sector across Australia,” Mr Bailey said.

“The fact that so many Queenslanders were finalists is very exciting as we prepare to release the new 10-year Queensland Cycling Strategy in the coming months.

‘I would really like to thank the Cycling Promotion Fund for giving us this chance to acknowledge the local cycling advocates who help me do my job better and are contributing so much of their time to ensure the choice to ride a bicycle is much easier.”

The finalists came from seven of the nation’s eight states and territories and were selected from a pool of nearly forty nominations for the three categories. Queensland led with four finalists.