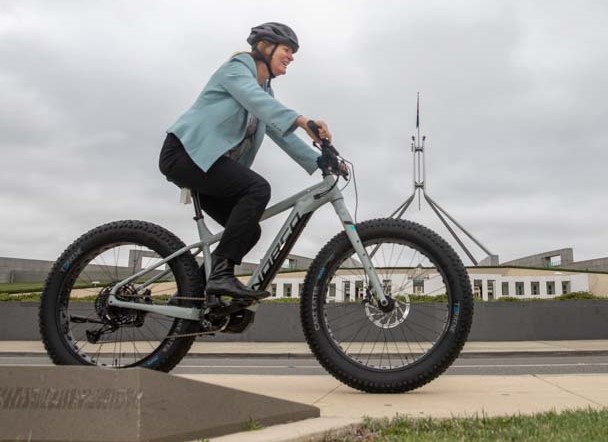 The inaugural event to launch the Parliamentary Friends of Cycling took place this morning outside Parliament House. We Ride introduced MPs, Senators and their staff to e-Bikes, e-cargo bikes, folding e-bikes, e-Postie bikes and e-mountain bikes. 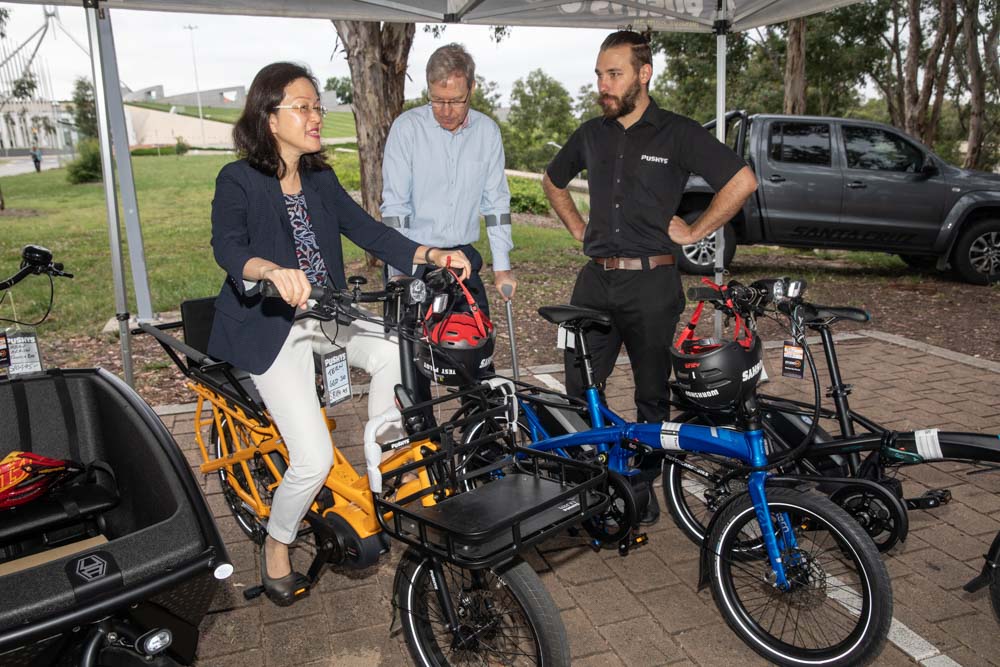 Gladys Liu MP gets a feel for an e-cargo bike with WeRide’s Stephen Hodge and Ben from Pushys.

Co-Chairs Dave Sharma MP, Hon. Dr Andrew Leigh MP and Dr Helen Haines MP welcomed their colleagues in an engaging, informal experience with a range of e-Bikes on hand to look at and try around Federation Mall. 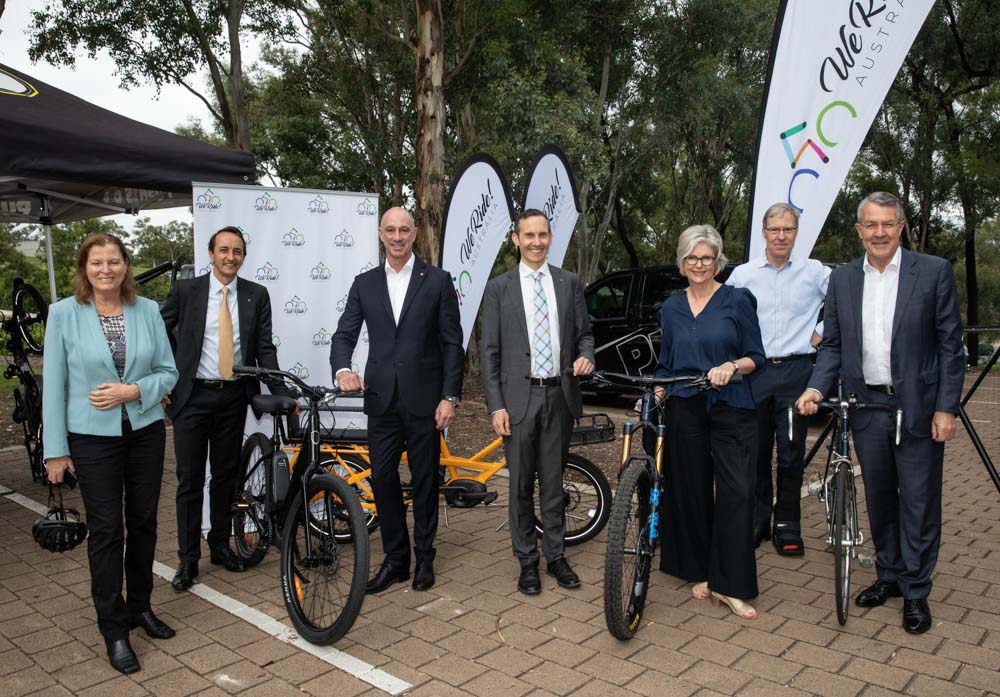 In addition to the bikes on show, WeRide’s Peter Bourke outlined the boom in sales globally and in Australia resulting from the adoption of Pedelec standard EN15194 as well as last mile freight delivery opportunities using e-bikes, Jeanie Wolki from Pushys gave her perspective on why she loves her e-bike and Shimano’s Brian Seng covered the unique cycling characteristics of cycling with assistance. 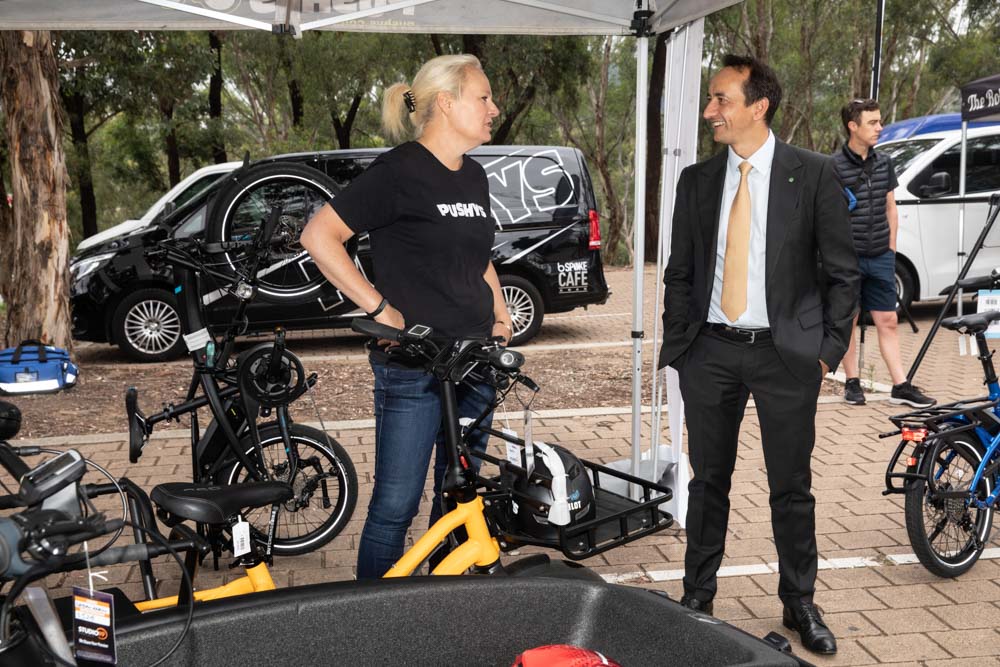 While several of the MPs attending had a good understanding of e-bikes, others took the chance to try one for the first time and others came down to have a look at them for the first time. Thomas from The Rolling Fix was on hand to service bikes from Parliament House. 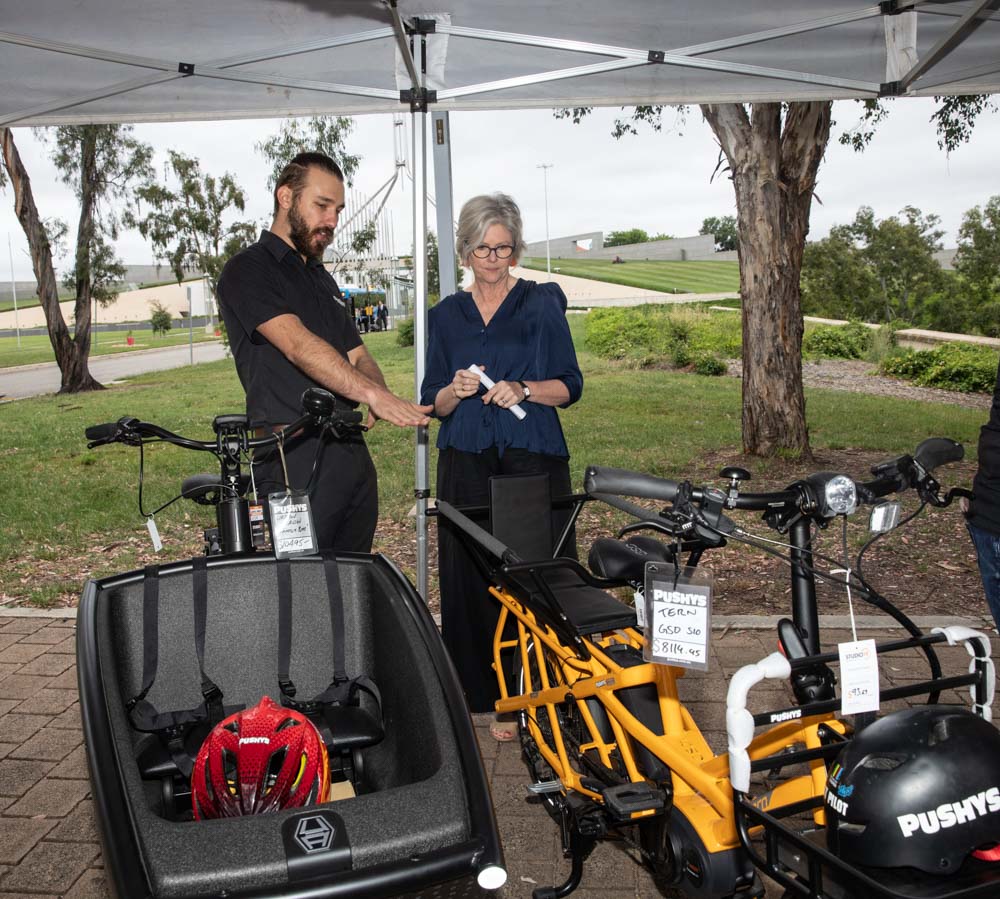 The Friends of Cycling group is an initiative of We Ride Australian that for the first time ever provides a platform in Parliament for bicycles and people who ride bikes. The event was supported by WeRide members Bosch, Dutch Cargo Bikes, Pushys, Shimano Australia and The Rolling Fix. Future events are expected to look at the impact of various COVID-responses that have resulted in more separated bicycle lanes and space for cycling in Australia and around the World, the regional economic boom being driven by cycle tourism, including MTB parks and Rail Trails and improved communities and road safety through better approaches to planning, investment and data. 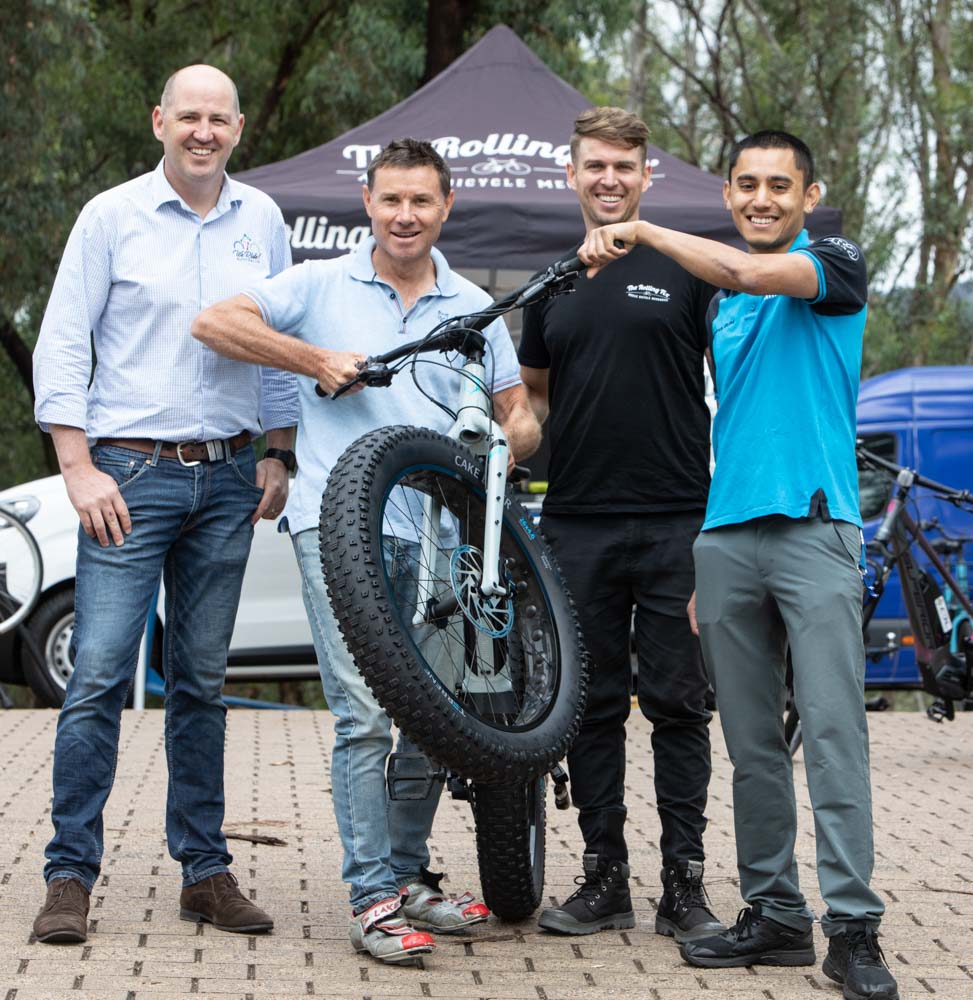 A fact sheet on e-Bikes* was available for MPs and several opportunities discussed to assist individual MPs in their electorates.

* Please see references and credits on the fact sheet and below. 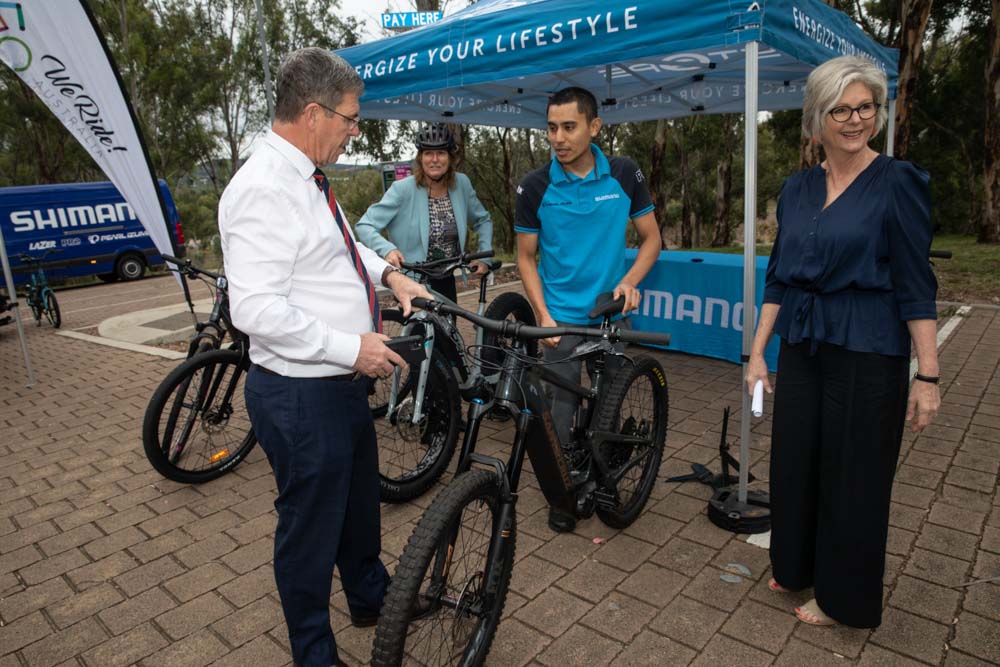 The Friends event comes just a day after We Ride Australia organised a timed cycling event as part of the Parliamentary Sports Festival ‘Recognise’ in honour of first responders from the Defence forces, Police, Rural Fire Service, health first responders and more. Great assistance for the event organisation and timing was provided by AusCycling in the ACT and Parliamentary cycling group Riders on the Hill, representatives from the first responder teams and other Parliamentarians participated in the short route up Red Hill in Canberra. 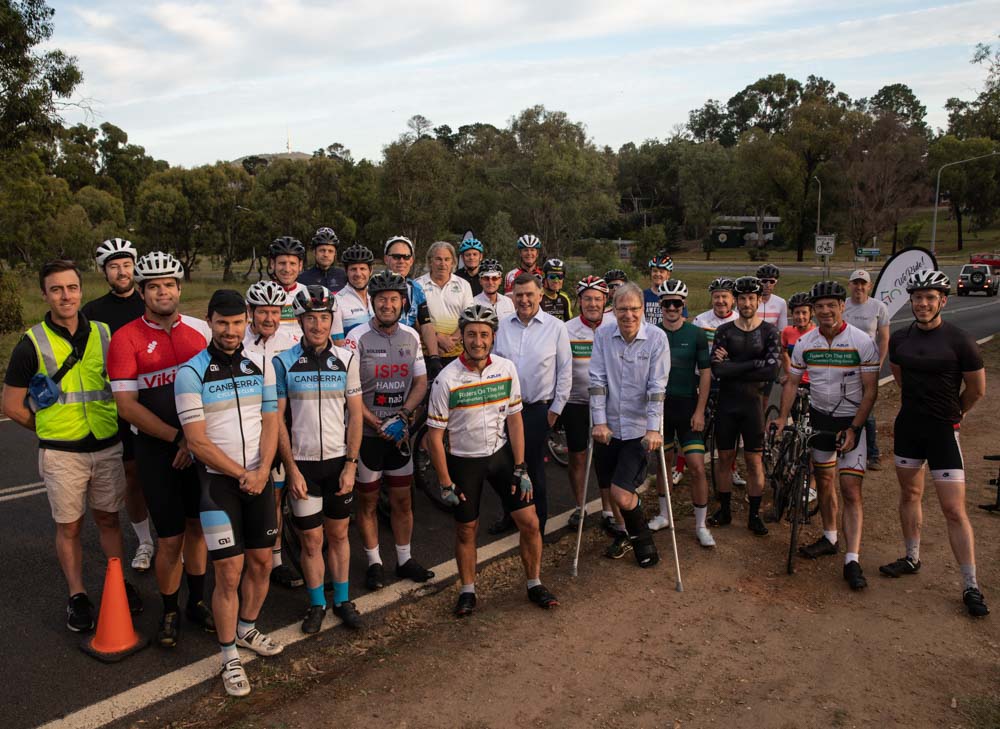 Our thanks to Dr Elliot Fishman in particular for information used in the e-bike fact sheet.