Cycling commitments for the NSW election 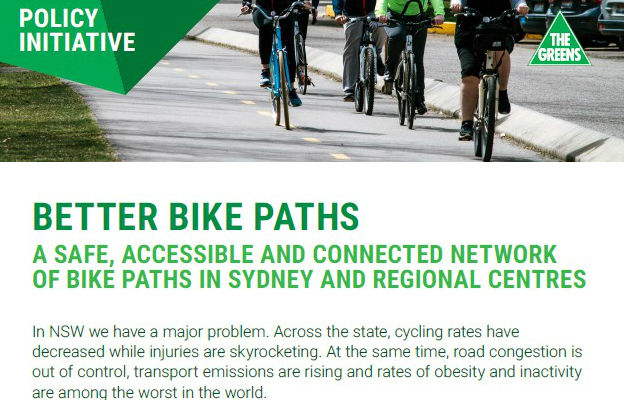 NSW has been the scene of some of the most heated political and media battles over transport cycling we have seen in this country (remember College Street?), but there are a few promising signs of change in the commitments made ahead of the State Election on the 23rd.

Commitments from the NSW Greens top the pool with a four year commitment for one billion dollars. Contained in the policy ‘Better Bike Paths – a safe, accessible and connected network of bike paths in Sydney and regional centres’ it establishes a $250m per year infrastructure fund. While seemingly large, this amount is nevertheless still dwarfed by the amount spent on other transport projects and corresponds to a modest $30 per person per year. 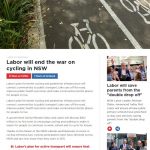 The Labor Opposition has vowed to “end the war on cycling in NSW” and committed $412m over the next term of government if elected. It includes $7m investment in safe routes to schools and better cycling and pedestrian infrastructure. Their “plan for active transport will ensure that planning for cycling and walking infrastructure is included in all future major road and rail projects, to help take cars off the road, encourage physical activity to and from work, and make access to public transport easier for cyclists and pedestrians.” 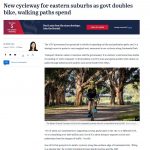 The Liberal Government has promised to double spending on bike and pedestrian paths to $330m and incorporate paths as part of major projects such as the South West Metro – worth an additional $285m. The Sutherland Shire will get a path from Sutherland to Cronulla Beach and the long awaited Bondi Junction to Sydney CBD link will be built.

The Liberals funding announced is over 5 years not 4, and we’re grateful to Bicycle NSW for their estimations of what the comparable commitments look like from each party. You can see the referenced figures here.