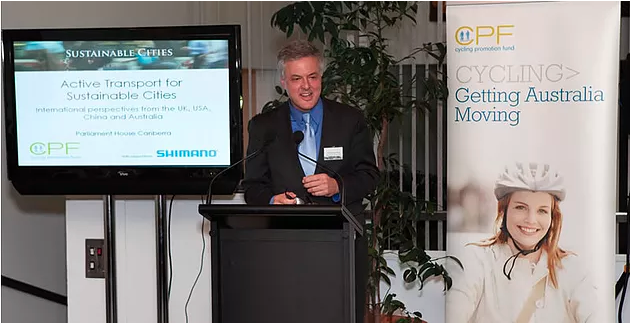 The Cycling Promotion Fund is very pleased to announce that internationally renowned President of USA’s PeopleForBikes Foundation, Tim Blumenthal, has been confirmed to provide the International Key Note Address at the 2017 Australian Bicycle Summit and Cycling Luminaries Awards in May.

As the former head of IMBA (International Mountain Bike Association) and now President of the PeopleForBikes Foundation (formerly Bikes Belong) since 2004, Tim has been a leading force in bicycle advocacy for cycling across the USA.

Working closely with industry and bicycle organisations as President of the People for Bikes Foundation, Tim has helped establish innovative, successful programs including; the Green Lane Project, Safe Routes to School, The Big Jump Project and Places for Bikes. All programs have been able to leverage industry investment to achieve significant government, philanthropic and private investment and support. PeopleForBikes has also developed a base of individual supporters that numbers more than 1.2 million.

The CPF and BIA are looking forward to understanding the lessons learned in the USA and the challenges that remain, and we are excited that Tim’s acceptance of our invitation will mean his long experience will be shared with the Australian bicycle industry and advocacy organisations.

Tim Blumenthal has previously addressed Australian Parliamentarians at the invitation of the Cycling Promotion Fund and we are honoured to have him with us for the 2017 Summit and Cycling Luminaries Awards in Brisbane on the 12 May.