Aussie kids’ fitness at an all time low 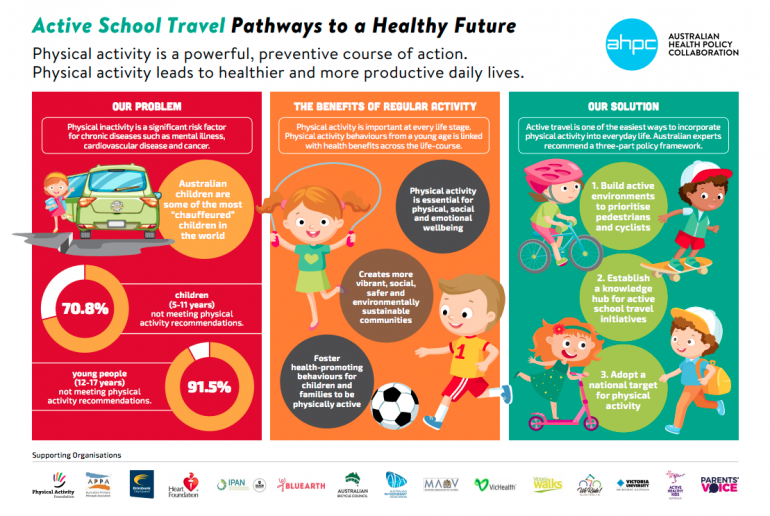 Australian children are not doing enough physical activity to ensure their long-term health.

On the day that kids around the country return to school, a group of national health experts have urged for concerted action to ensure all Australian children have a healthier, more active start to life.

Active Travel: pathways to a healthy future proposes a national approach for all levels of government to enable children to be more physically active on their daily trips to school through better local environments adjacent to schools and greater support for parents, teachers and local communities.

As a member of the Australian Health Policy Collaboration (AHPC), We Ride Australia believes that active travel to school is one of the easiest ways to incorporate physical activity into everyday life.

“70% of primary school children are now driven to school, but we know that many more would walk, scoot and ride a bike if safer paths and crossings existed in school zones,”

“The AHPC’s report is a national policy framework and implementation strategy for low cost, high impact interventions to enable 3.7 million Australian children to walk, scoot and ride to school,”

“Without a reduction in physical inactivity, we are risking the future health, emotional and economic wellbeing of our children,” said Hodge.

Active Travel: pathways to a healthy future has been prepared in collaboration with and is endorsed by prominent organisations including the National Heart Foundation, VicHealth, We Ride Australia, Parents Voice and the Australian Primary Principals Association. The report calls for improvements to the built environment and infrastructure around schools as a crucial component of a national strategy to get more children participating in daily exercise through active travel.